A small-town residential community with a population of 30,000, Saratoga 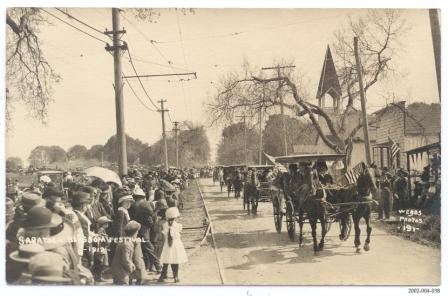 has a colorful past. From a frontier town to an industrial settlement, from a village of fruit orchards to a residential city, Saratoga has continually evolved over its colorful 160-year history.

It began with a sawmill. In 1848, William Campbell set up shop on the banks of what is now Saratoga Creek. His sawmill was destined to be the seed of a new community, but before he could complete it, gold was discovered at the western base of the Sierras, touching off the California Gold Rush and delaying Campbell's plans.

Martin McCarty leased Campbell's mill in 1850, and began improving access to the site by building a toll road. The new road made it easier to transport lumber, and encouraged the growth of industry in the area. Before long, the sawmill was joined by a tannery, furniture factory, and paper and flour mills. The community that grew up around them was known for short periods of time as Tollgate, McCartysville, and Bank Mills.

The settlement received a permanent name after residents discovered a mineral spring in the early 1860s. The spring's chemical content was quite similar to that of Congress Spring at Saratoga Springs in New York, and in 1865 the town was officially named Saratoga. Soon afterward, the Pacific Congress Springs resort hotel opened for business, serving travelers and the valley's elite. The frontier town had suddenly become a resort destination.

At the same time, industry in Saratoga gradually gave way to fruit orchards and vineyards. From cherries and apricots to French prunes, Saratoga's bountiful fruit harvests made it a popular trading post. In 1890, renowned winemaker Paul Masson opened his Mountain Winery in Saratoga, planting French champagne grapes in the rich California soil.

Saratoga's identity continued to transform throughout the 1900s, as orchards were replaced by homes and the palatial estates of the valley's wealthy businessmen and politicians. One of the most impressive of these is Villa Montalvo, established in 1912 by United States Senator James Phelan, and now a hub for Saratoga's art and music scene.

The valley's shift towards suburban and urban living in the years after World War II cemented Saratoga's status as a residential community and its reputation as an excellent place to live. In 1956, wary of potential annexation plans from San Jose, the residents of Saratoga voted to incorporate and establish their own City government.

Saratoga is vastly different from the town that Campbell and McCarty started over 150 years ago, but it remains a thriving community. The industry and most of the orchards may be gone, but the city retains the character of a small town tucked away in the trees of the Santa Cruz Mountains.

View historical photos of the City of Saratoga. The images are courtesy of the Saratoga Historical Foundation and Museum.