After approximately 100 years of providing oxygen, shade and a beautiful canopy to visitors of Blaney Plaza, the last Italian stone pine tree in the entranceway of the Saratoga Village was removed in June 2015 due to its declining health.

The City's signature pine tree had suffered from harsh drought conditions and was infested with wood boring beetles. The beetles lay their eggs on the tree just under the bark. When the eggs hatch the larvae feed on the tissue of the tree, creating tunnels as they eat the wood. These tunnels cut off the flow of food and water and eventually kills the tree.

Italian stone pines are normally drought tolerant and do not suffer from wood boring beetles. However, when there is a prolonged drought-such as the one that occurred in California starting in 2012-the beetle population increases dramatically and can overwhelm even a vigorous tree. The Blaney Plaza Italian stone pine was a century old and at the end of its normal life span, so fighting off an infestation is more difficult. 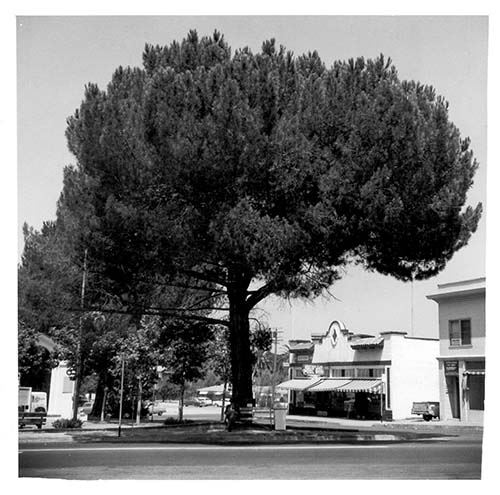 Three Italian stone pine trees were planted in Blaney Plaza around 1915, five decades before Saratoga was incorporated. Italian stone pines are known for their beautiful, vast canopies and the three pines that graced the entranceway of the picturesque Saratoga Village were no different.

An August 1958 article written by then Saratoga Tree Commissioner Bernhard Hoisholt for the Times-Observer said of the pines, "Saratoga is indeed fortunate to have several specimens of this remarkable tree. Three splendid examples are featured in Blaney [Plaza] in the heart of the original business district. They have made phenomenal growth in these forty years, requiring little or no attention and thriving in our mild climate."

One of the stone pines was removed in the 1960s when the State widened Saratoga-Los Gatos Road and realigned Blaney Plaza to accommodate increasingly heavier traffic. The removal did not go unnoticed. A January 1965 San Jose Mercury News article about the "Pine Tree in the Path of Progress" said, "For the uninitiated, trees are sacred in Saratoga."

The other two Italian stone pines lived relatively quiet lives until 1992 when City staff noticed that one of the pine trees-the one still standing in Blaney Plaza today-had begun leaning into the spur road and was pushing against an electrical box. Local arborist Blair Glenn was called out to assess the situation. With a "wing and a prayer," he climbed up the pine and removed about 7,000 pounds of limbs to help stabilize the tree. Two wooden posts were also attached to the pine to keep the tree from leaning further into the roadway. The posts are still there today. Blair Glenn recounts the event in a 2008 video diary.

In March 2011, resident Don Whetstone informed the City that the Italian stone pine closest to Big Basin Way appeared to be leaning into the roadway more than usual. The tree's large canopy, its pre-existing lean, and saturated soil from recent rains were thought to be the reasons behind the additional leaning. Emergency pruning work was done to eliminate extra weight. However, after reassessing the situation, it was decided that the tree had to be removed. The stump is still present in Blaney Plaza, and a flower pot has been placed on it by the Saratoga Village Gardeners as a tribute and memorial for the lost pine.