COVID-19 Information Learn about COVID-19, the Stay at Home Order, and updates to City services. Read On...

The proposed Palm Villas Saratoga project includes the construction and operation of a Residential Care Facility for the Elderly on Saratoga Creek Drive off Cox Avenue. Two buildings would be constructed that are designed to function as a single complex, containing a combined total of 78 beds. The first building would be for individuals with mild stage Alzheimer’s/Dementia and the second for individuals with advanced stage Alzheimer’s/Dementia. The proposed project also includes related support functions (such as food service, pharmacy, laundry, administration, etc.), 47 parking spaces, landscaping (including removal of some trees), utility connections, and an extension of Saratoga Creek Drive. 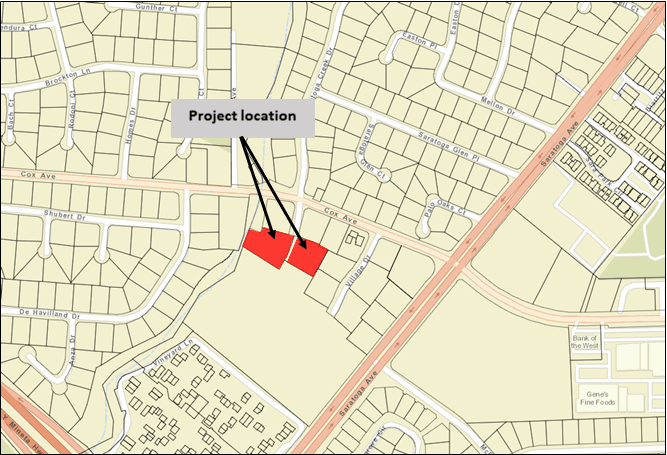 As part of this process, a Public Scoping Meeting was held on February 26, 2019 to share information about the proposed Palm Villas Saratoga project and gather feedback from the community.

The Draft Environmental Impact Report (EIR) was released for review on January 31, 2020. All comments on the Draft EIR must be received by 5:00 p.m. on March 2, 2020. Printed copies are also available at the Community Development Department (13777 Fruitvale Avenue) and the Saratoga Library (13650 Saratoga Avenue).