The Saratoga Retirement Community (SRC) campus is located at 14500 Fruitvale Avenue on three contiguous parcels, totaling approximately 37 acres. The General Plan land use designation of the property is Community Facility Sites, and the zoning is R-1-40,000.

On June 21, 2019, SRC submitted an application to the City seeking approval of three new buildings which would contain 52 independent living units. If approved, this would bring the total residential units to 298 and skilled nursing beds to 52. A new meeting room would be added to the existing Manor building, and a new workout room would be added to the existing fitness center. The project proposal includes 113 additional parking spaces and the construction of a public trail connecting Fruitvale Avenue with the San Marcos Open Space.

The project is currently under review. The City has retained a consultant to prepare the Environmental Impact Report (EIR) and data collection. The California Environmental Quality Act requires that an EIR describe and evaluate a range of reasonable alternatives to the proposed project. Community members submitted an alternative plan to the City, which has provided the EIR consultant with the plan for analysis. 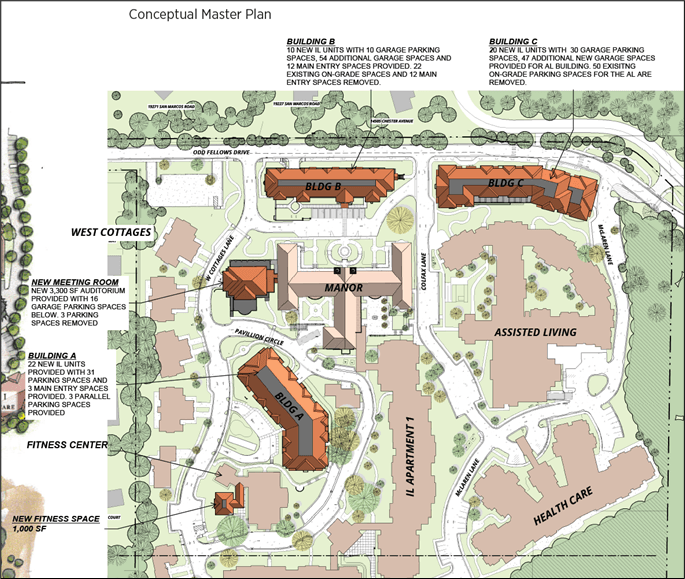 The community will have multiple opportunities to provide input at a series of public meetings with the Heritage Preservation Commission, Planning Commission, and City Council. Meeting dates and timeline updates will be added to this page as information becomes available.

Sign up to receive notifications about the proposed Saratoga Retirement Community project. After selecting the list(s) you would like to subscribe to, you will receive an email requiring you to confirm your subscription(s). Please let us know if you experience any difficulties.